Every adventure has got to start somewhere right?

In a game as big as Old School RuneScape the possibilities can seem endless. And it can be daunting trying to find your way as a new player.

Worry not! In RuneScape there are a number of quests that teach you about the exciting world of Gielinor as well as the many skills and monsters within.

So where should you start?

The best place for any novice would be with the free to play quests, which are specifically designed to get you introduced to the game.

Luckily I’ve completed all these quests already, and will break down some of the best ones that you should get done early. That way you can focus on getting your character ready for the challenges ahead! 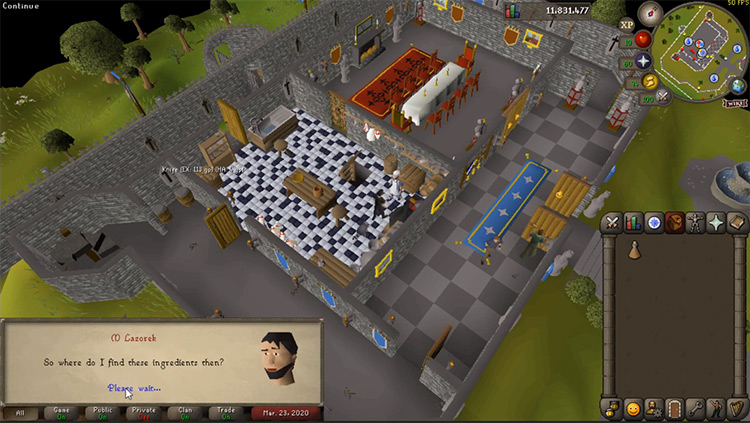 Who doesn’t dream of, well… assisting a cook!

When you finish the tutorial and spawn in Lumbridge, this will likely be the very first quest you see on the mini-map.

In this quest you’ll learn the foundations of the Cooking skill while assisting the cook of Lumbridge castle. It’s a very easy quest, only taking around five to ten minutes.

Rewards: 1 Quest point and 300 coins.
Where to Start: Ground floor of Lumbridge Castle. 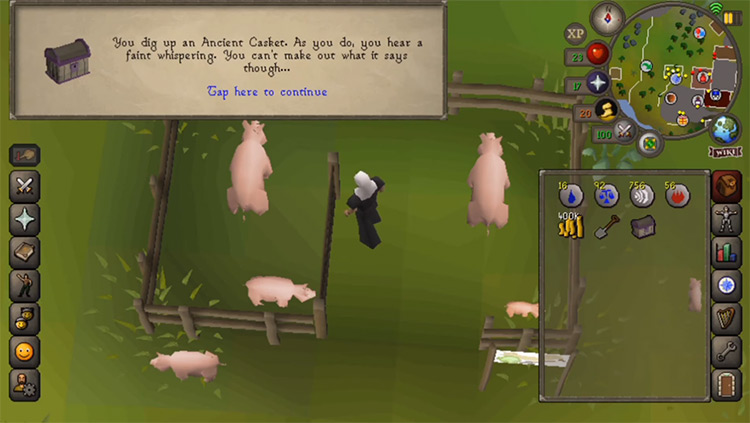 Before we leave Lumbridge, this next quest is the one you’ll want to do.

It provides an introduction into the clue scroll system where you solve riddles and clues to unlock rewards.

X Marks the Spot sends you on a treasure hunt around Lumbridge, teaching you all the mechanics and rules of how a beginner clue scroll works.

Rewards: 1 Quest point, an experience lamp worth 300 experience in any skill, 200 coins, and a beginner clue scroll.
Where to Start: The Sheared Ram Pub in Lumbridge 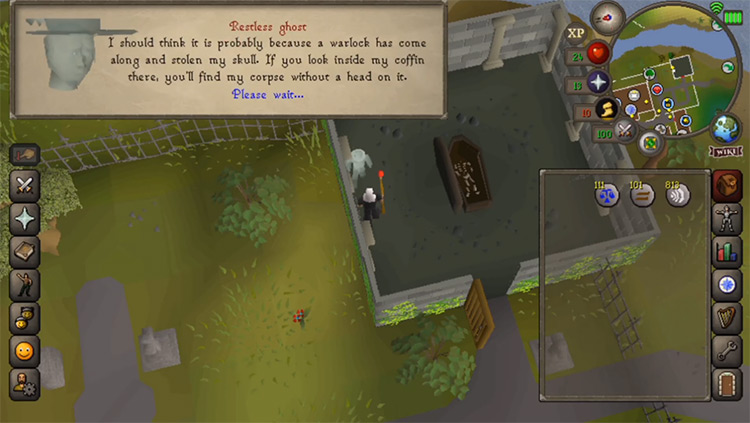 Now it’s time to take a short walk to the Lumbridge altar.

Here you’ll find a curious case of a ghost haunting the Lumbridge graveyard.

And it’s your job to get rid of the ghost.

This quest will have you exploring the Lumbridge swamps to find an amulet which lets you communicate with the dead.

I won’t spoil too much, but the quest provides some early experience in the Prayer skill, which is extremely important later in the game.

Rewards: 1 Quest point, plus 1,125 prayer experience, and an Amulet of Ghostspeak.
Where to Start: Lumbridge Church. 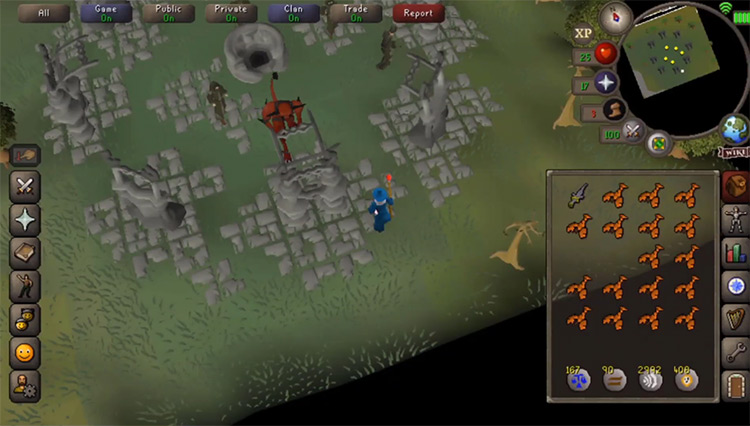 So let’s be real:

The real reason we’re all playing this game is to slay some epic monsters, as well as get some amazing loot while we’re doing it.

Well now’s your chance to do both!

The city of Varrock is under threat by the demon Delrith, and you’re the only one who can stop him.

In this quest you’ll be assembling the fabled sword, Silverlight, which is the only weapon capable of damaging Delrith.

Facing Delrith will be no easy feat for any new player just starting out, as he’s level 27 and can pack quite the punch.

I recommend taking some high healing food, such as lobster, to ensure you defeat him once and for all.

Rewards: 3 Quest points and Silverlight
Where to Start: The Gypsy’s tent in Varrock Square 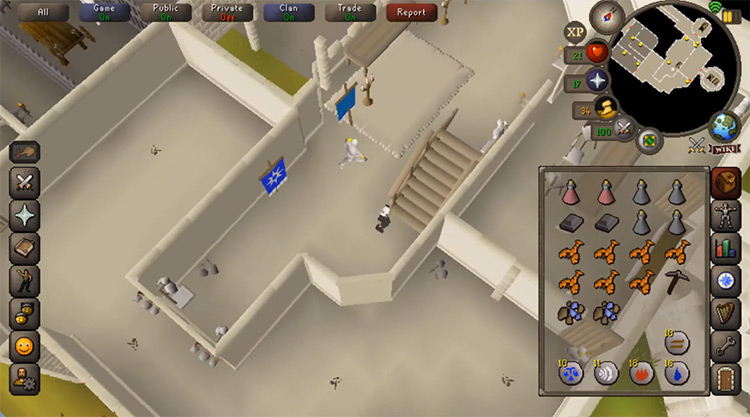 This quest is fantastic for novices looking to get some very juicy Smithing experience, while also learning about the Smithing and Mining skills.

In “The Knight’s Sword” you’ll see yourself assisting Sir Vyvin in replacing a lost sword.

This, however, is no ordinary sword. As it’s made of Blurite ore!

You’ll find yourself delving deep into the Asgarnian Ice Dungeon to retrieve some of this rare ore.

Just be wary, as there are some powerful enemies to avoid here, such as Ice Warriors and Ice Giants who are more than a match for any beginner.

Rewards: 1 Quest point, a massive 12,725 Smithing experience, and the ability to smelt Blurite bars.
Where to Start: Ground floor of the White Knights Castle 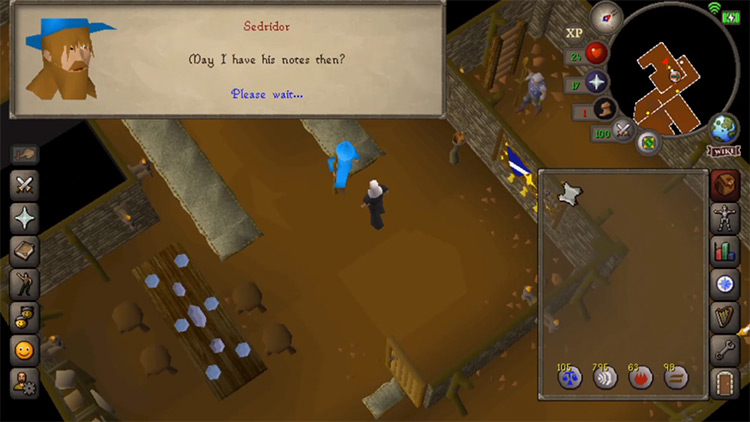 What is a rune?

Why are they mysterious?

Completing this quest will answer all of your questions and unlock a brand new skill, Runecrafting.

In OSRS, Runecrafting is the ability to make your own runes from Rune Essence, which will come in very handy when you want to start training magic.

I recommend getting this quest done as soon as possible, as crafting runes later on in the game is one of the best money makers around!

Rewards: 1 Quest point, the ability to craft runes, and an air talisman.
Where to Start: The 2nd floor of Lumbridge castle. 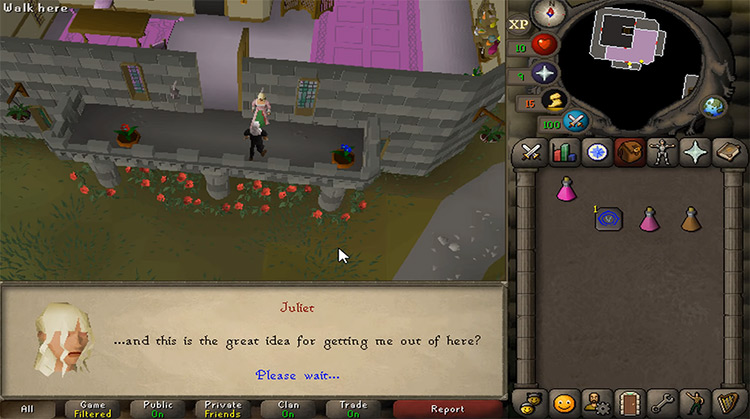 We all know the story of Romeo and Juliet.

Well RuneScape adds its own fun dialogue and spin to this legendary love story which will have you giggling (and possibly actually laughing out loud).

Ultimately there’s no large reward or boss to kill here.

Just a fun story about two star crossed lovers and your role in it.

You won’t walk away empty handed, though. As you’ll gain a large amount of Quest Points, which will be useful in unlocking future challenges. 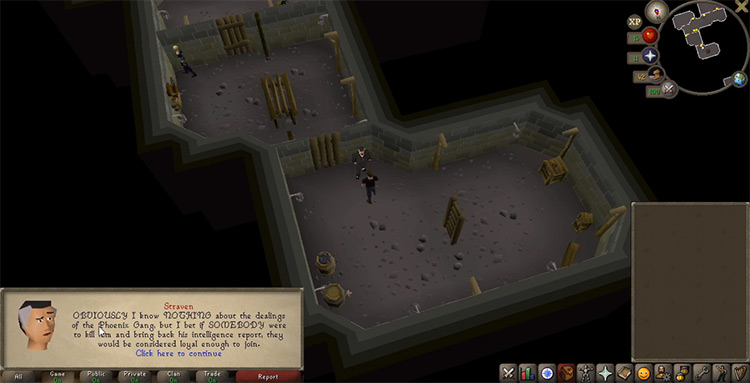 It’s time to phone a friend if you want to complete this quest!

While many of the quests that RuneScape offers are solo adventures, this one requires that you work with a friend so you can both complete the quest together.

You’ll be delving into the dark underground of Varrock’s most infamous gangs, namely The Black Arm Gang and The Phoenix Gang.

And to complete this quest, you and your friend both need to work together and join separate gangs, that way you can reunite both pieces of the Shield of Arrav. 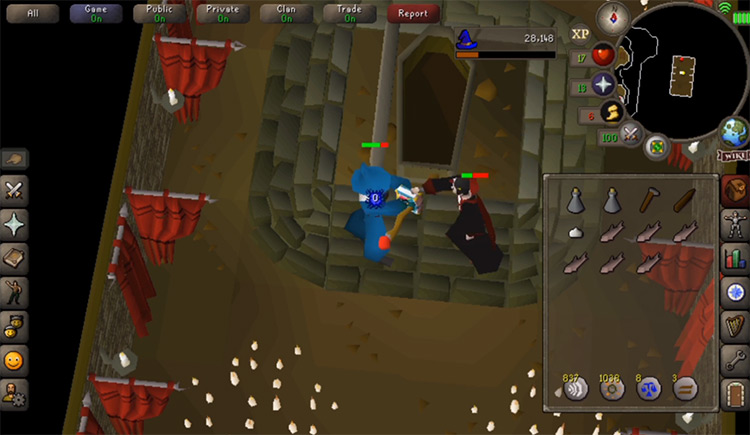 At this point you should be ready for a real challenge.

If so, then head on down to the town of Draynor Village.

Here you’ll find the villagers living in constant fear of the deadly vampire who dwells in Draynor Manor.

This level 34 vampire is no joke, and can defeat even the most prepared adventurers.

An easy way to defeat him is to use fire spells and trap him behind the terrain. Just remember to bring your stake, and maybe even some garlic! 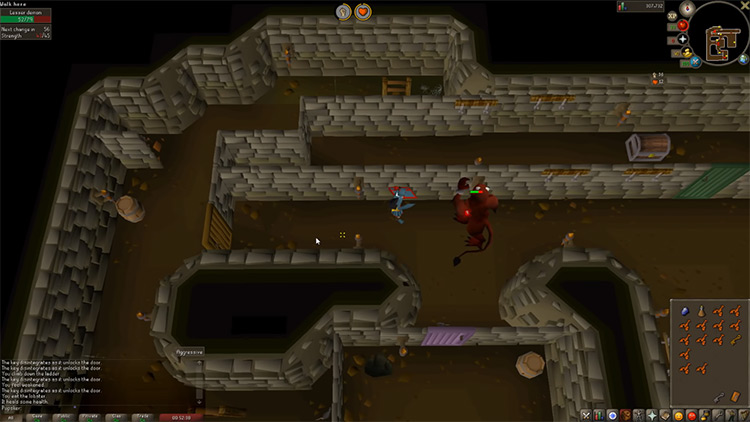 We saved the best for last.

This quest is by far the most difficult and most dangerous quest for non-members, requiring a total of 32 Quest Points to even attempt it.

Those points are required to gain access to the Champions’ Guild.

In this quest you’ll need to defeat multiple enemies, solve difficult riddles, track down a long lost island, as well find a captain crazy enough to take you there… And lastly, defeat a level 83 dragon!

Dragon Slayer is the hardest non-member quest in Old School RuneScape, but is well worth the effort.

You’ll unlock a variety of rewards, including the right to wear the coveted Rune Platebody and Green D’hide Body.

Be wary and keep your wits about you, and you should take down this quest in no time! 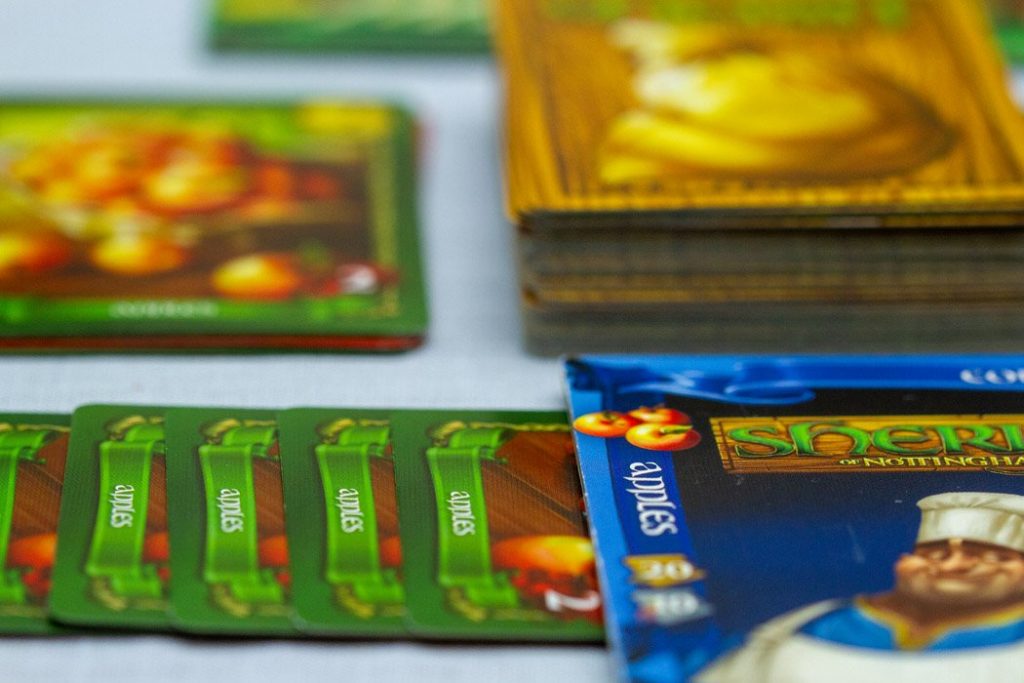 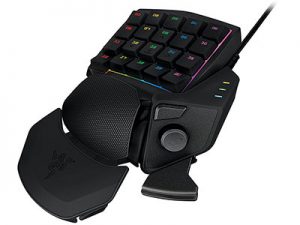 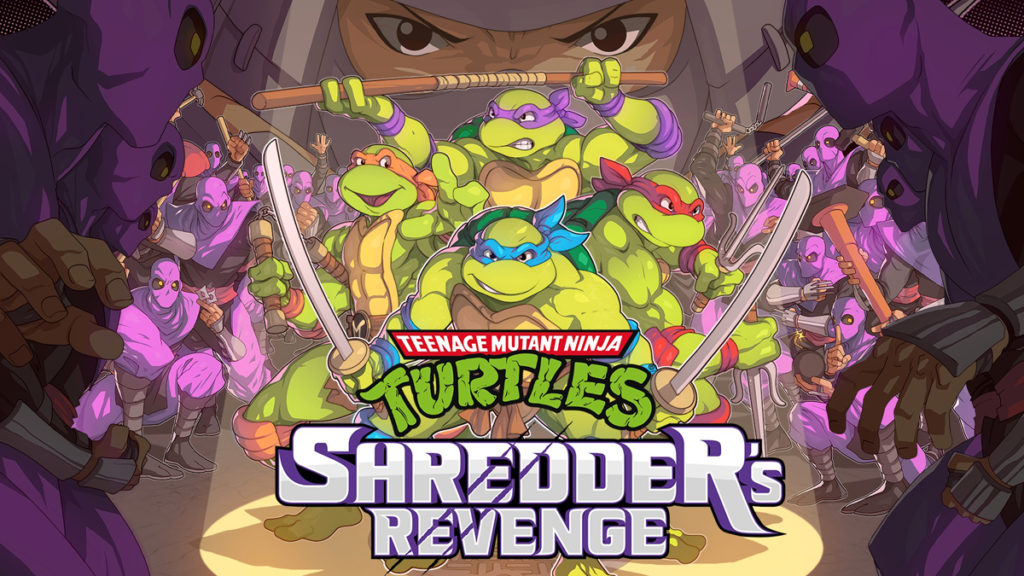 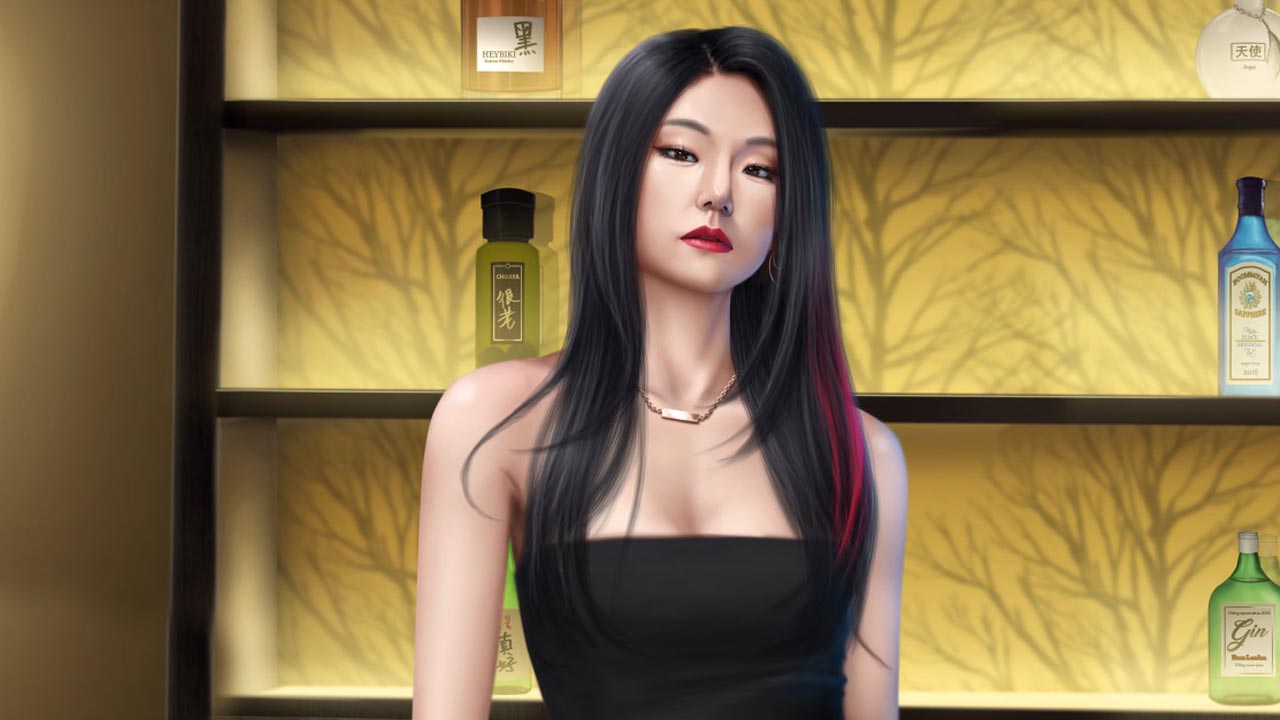